Hello again and welcome back to America under the Microscope, hello James.

What are we going to talk about today?

Let me ask you a question when you hear the word Indian, what do you think of? 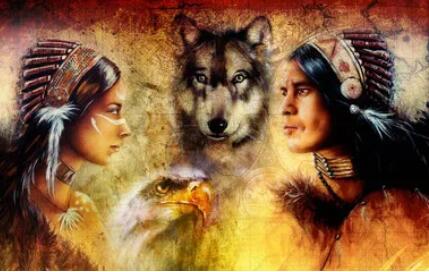 Indian? You mean people from India?

Yes they are called native Americans, but the term Indian still survives till today.

Like I said before, Indian is not supposed to be a term you use nowadays in America to refer to native Americans. Right?

Right, because the term Indian was an accident to be honest, because these early explorers that came to America thought they got to India early. So that's like, oh, this is India, those are Indians.

So it was a mistake.

And I always remember when I was growing up, I heard those songs like ten little Indians.

Yeah, that would be a not... I know the song, but we don't sing it that way anymore. We would change the lyrics like ten little monkeys or something else that's more politically correct.

Politically correct. I don't think a lot of Chinese listeners really know that concept but it is a concept that is really prevalent in the United States right?

So what is political correctness?

Political correctness is about using the most appropriate term that does not offend the group you are talking about.

So here Indians in this context would be considered non PC. Native Americans would be more PC.

I know that Canadians, native people they call them first nations?

Because they were the groups of people that were there first.

I guess for most people, but especially for most Chinese learners of English. I guess our only concept about native Americans are probably from Hollywood films.

Oh yes probably the people riding on horses, having feathers in their hair, living in a kind of a tent we call a Teepee (TP). Yeah. The Hollywood stereotype is kind of a mixture of a whole bunch of different cultures that exist in the native American community.

So it's not accurate.

Not really. But there are some accurate films that do focus on a specific group like a movie we called Dances with Wolves which came out must have been twenty years ago.

Dances with Wolves, but with er... Kevin Costner.

That one's pretty accurate. But then we have movies like the Disney film Pocahontas.

Pocahontas, that does look like a very very romanticized version.

Right. So we've talked before about you know the size of America is a really big place and there are native tribes that lived in almost all parts of the country and so their cultures varied a lot.

Tribes, T R I B E and they all have different cultures?

Yeah. So they had different, there are some commonalities. They tend to be a lot more naturalistic, living in uh, the natural world and things like this. But they did have different myths, different stories. They spoke different languages. They even had different artistic styles and beyond that also their ways of life varied a lot.

So it's actually they're not just one group of people, there are many smaller groups. Yes. But what about the... well nowadays obviously native Americans are not the mainstream. They don't take a large percentage in the total population. So what about the mainstream Americans, Let's say the majority of American kids. When they're in school, do you guys get taught about the history?

Yes we do because it is a big part of history in the country. American kids learn quite a bit about the local tribes. So growing up I learned a lot about the tribes that were in the area we were in. And we also learned about some like historical figures like a woman called Sacajawea

who was a guide that led a famous expedition across the country.

Sacajawea, that's perhaps the only other famous native American name that I know apart from Pocahontas.

Those are the two most famous.

You do see it in a lot of the TV shows, movies they mention it. But you know if you don't mind me saying, that is a quite dark part of the history. There are lots of bad things happened, especially things when people think of thanksgiving. Nowadays, thanksgiving seems to become quite commercialized in China for some reason, but I don't think a lot of people really know that part of history about thanksgiving.

All right. So in the first, thanksgiving yes the native people did help the settlers who showed up with their food. But unfortunately natives did start dying after this because the Europeans had diseases that they were not immune to.

Perhaps we'll talk more about that in the advanced episode. But anyhow, that thanksgiving in short is about the native Americans, they helped out the settlers, this I always find quite interesting. You call it settlers or pilgrims right?

Americans use the term pilgrim.

That's what they're doing.

Yeah. that's also true. But these people at that time we're not setting up a colony. There were just moving to a place to live.

Now back to more about that part of history in the advanced episode, but back to the native Americans， we just talked about they have many different groups. You said they have different culture， different believes， but what did they do for a living?

Well that would depend on usually the region they're from. So in the central parts of the country the what we call the great plains which is giant grasslands. In the middle of the country we have giant grasslands and this area the native Americans tended to be more nomadic. So they travelled from place to place, following herds of animals and more hunters.

So they're more hunting and gathering.

Yeah, tribes lived in closer to the oceans or rivers, tend to be more of a fishing based culture.

But we also have a lot of words that have entered American language that come from native Americans or native American ideas. And these words you do hear a lot. The first one is chief.

Chief is the head of a tribe.

Yeah, which chief itself probably isn't a native American word, but when most Americans hear the word chief, they think of native Americans, but it does mean and today we can use it to describe the boss or the person in charge. But yes.

The chief like you said there's an association with native American tribes.

And the next one we're gonna look at is pretty unique as something called a totem pole.

Yes. And what this was is a really tall pole, they took a tree and they carved on it. They have different images on it like carvings of animals, spirits and stuff and it's supposed to be a big part of certain tribes. Culture.

Kind of. The next one we have is powwow.

p o w w o w. That I often hear. I never understood what it meant.

It's quite simply means get together, like a meeting of something. So we can say let's have a powwow, which means we're gonna get together most likely talk or discuss something.

Can be casual, it can be more formal. But it's just they get together and that is also from a native American language.

I have never heard either and lastly is in America, a lot of place names have native American origins like Toccatas, Idaho. Basically if you go to America and you go to find a place that has a very unusual name, that is obviously not Spanish or French or European language, then it's a good chance it's a native language.

I find that to be quite similar to Australia. So when I was travelling around Australia any of these words that don't look like English, they turn to be the native language, the aboriginal language.

America is very much the same.

Okay. So see you next time.