As a child, Claudine Humure lost both of her parents during Rwanda's genocide.

She also had one of her legs removed because of cancer.

Today, she is working to give back to her homeland.

Humure spent part of her childhood in the northeastern American state of Massachusetts.

There, she received cancer treatment and her first artificial leg.

The 29-year-old recently returned to the state to get fitted with a new leg—also called a prosthesis. 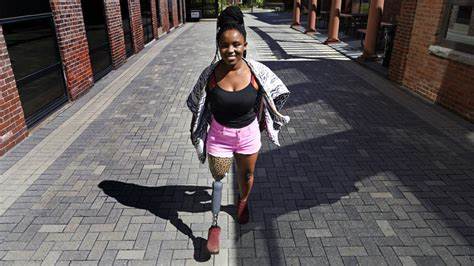 At Next Step Bionics and Prosthetics outside of Boston, she practiced walking on her new leg.

"It feels easier to walk on," Humure said.

"I don't know if it's natural.

It's been so long I don't remember what natural feels like."

The artificial leg she had the last four years had been damaged by Rwanda's hilly land.

Humure's new prosthetic leg was given to her for free by Next Step.

The device offers her the latest in artificial leg technology, said Arthur Graham.

He has worked with Humure for several years.

He watched closely as she used her new limb.

Her new knee can quickly react as Humure moves her body weight from one leg to the other, Graham said.

The device's foot is also adjustable.

So, she can easily go from sports shoes to high heels and other kinds of shoes.

There are not many places in Rwanda that have such technology.

So, Graham has provided Humure with advice on how to care for her prosthetic leg on her own over the years.

Humure said her experiences led her to work toward a career in prosthetics.

She will soon start a graduate program at the University of Washington in Seattle.

She hopes to one day open a nonprofit clinic and provide less costly prosthetics to other Rwandans.

There has also been an increasing number of serious road accidents in the country of nearly 13 million people.

Yet, many amputees there are still having to use incorrectly fitting devices or self-made systems because of the high cost of good prosthetic devices, Humure said.

"I have been privileged to wear some of the most advanced prosthetics that a lot of Rwandans do not have access to," she said.

"No one should be denied the right to stand on two feet and the ability to move around independently."

When Humure first came to Boston, she was 12 years old.

She was using a wheelchair and had been living in a home for children without parents.

She already had most of her right leg removed to treat bone cancer.

But she needed additional treatments as the cancer spread.

Doctors at the Boston-based hospital also fixed the remaining part of her amputated leg so that a prosthetic could fit it better.

She returned to the city to attend high school.

She completed her studies in biology in 2017.

While in college, Humure worked with experts at Massachusetts Institute of Technology's Media Lab.

She helped with the lab's research on the newest kinds of prosthetics.

Some of the people she worked with included survivors of the 2013 Boston Marathon bombing.

Most recently, Humure has been living in Kigali, Rwanda's capital.

She works at the University of Global Health Equity.

"Yes, I went through a lot," Humure said.

"But I would not have gotten through anything without all the people who have supported me along the way."