The advanced weapon system could be harder to defend and continues to expand the country's military power.

The state-run Korean Central News Agency, or KCNA, posted a picture of a test launch of a hypersonic missile called Hwasong-8. 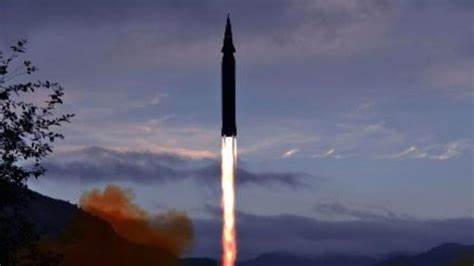 It said Tuesday's launch was successful and met the technical requirements of a "detached hypersonic gliding warhead."

It means the warhead could come off the rocket and move in flight toward a target.

A hypersonic missile, also known as a Hypersonic Glide Vehicle, can fly much faster than the speed of sound.

It can fly very low making it harder for current missile defense systems to recognize.

It can also be controlled in flight, which means it can move away from other missiles making it harder to defend.

Adam Mount is an expert at the Federation of American Scientists.

He said the hypersonic missile is designed to get through defense systems like the one operated by South Korea and the U.S.

South Korea's Joint Chiefs of Staff, however, estimated the North Korean missile to be at an early stage of development.

It said North Korea would need "considerable time" to be able to deploy the missile.

The launch of the hypersonic missile was North Korea's third round of missile tests this month.

It took place shortly before a North Korean diplomat at the United Nations General Assembly accused the United States of hostility and demanded an end to joint military exercises with South Korea.

The missile is similar to a short-range missile that North Korea tested two years ago called the KN-23.

However, the new missile has a warhead that can come off the rocket and continue toward a target.

This kind of warhead could be attached to a more powerful rocket and strike a target on another continent.

Vipin Narang is a nuclear security and political science expert at the Massachusetts Institute of Technology.

He said this kind of missile would present "a big problem for the U.S."

He added it could be hard to find and the warhead could be difficult to defend.

The process places rocket fuel in containers for storage and could be quickly added to the rocket before launch.

In the past, North Korean rockets needed to be fueled at the launch site which took more time and opened the launch to attack.

North Korea's missile tests also include weapons that could be launched from vehicles, trains, and possibly even submarines.

As a result, the missiles will be harder to find and destroy in the event of a war.

Mount said the U.S. and South Korea alliance "will have to be ready for anything in a crisis."

He noted that North Korea showed some weapons but they may not yet be fully tested.